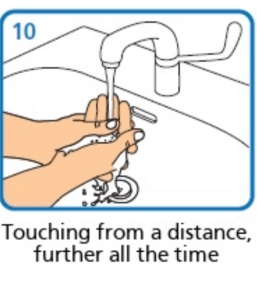 ‘The hand must not be thought of as simply an organ but instead as a coding… a dynamic formation‘ – Deleuze and Guattari (1987: 61)

The Coronavirus outbreak has led to a social preoccupation with hands, through the promotion of habitual hand-washing as a means of preventing the spread of disease. Hands are understood as a point of transmission and there is a now a ‘proper’, government sanctioned method of washing hands, which includes singing the words to ‘Happy Birthday’ twice to ensure the correct duration of exposure to soap and water. If you prefer, of course, you can subvert this using the words to you own (in)appropriate favourite tune:

Pre Covid-19, however, I had already found myself frequently thinking about hands. I have recently been tattooed with an image of hands, depicting a gesture made by Laura Palmer in David Lynch’s Twin Peaks. This hand obsession has also converged with my dedication to the use of 35mm film. Here are some photos of my own hands, taken with film and developed at home, in coffee.

This resulting gif is, in part at least, a means of thinking about sensory self-regulation, through repetitive motion. It also goes nicely with music (although you’ll have to provide your own!). 😉

So, why hands? Well, in an academic context, hands have made their way into my thinking a number of times, as a means of making meaning. In my own work, when trying untangle my ontology via Deleuze and Guattari, I  found myself (unexpectedly) drawing hands as a means of sense making, particularly in relation their ‘image of thought’ known as ‘the rhizome’. If I have shared this double page here before, that is largely because it represents what feels like a jump in my own thinking, and it is the means by which this thinking occurred that is my main focus here. 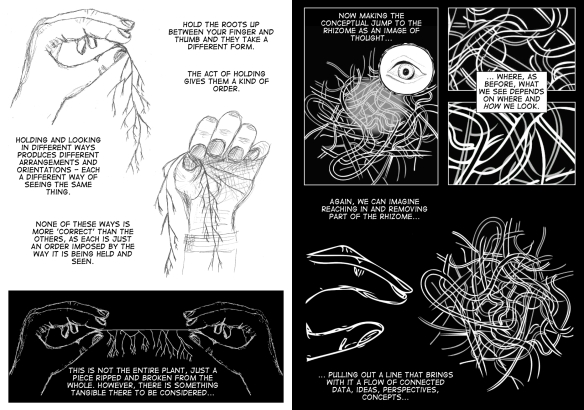 The comic depicts my handling of a project’s data. Although the data was predominantly virtual, in trying to conceptualise my processes of data analysis, I found myself physically acting out the movement of grasping at and manipulating this invisible, intangible data with my own hands, as if it data was an object or substance that could be untangled and held. This act of embodied thinking led me to develop the metaphor of the data as an organic rhizome, imagining – and, again, embodying – the image of a hand reaching into soil to pull out organic matter. Thinking with this specific metaphor, in this way, helped me to understand and explain my relationship with the data. However, when I came to convey this idea using writing it felt frustratingly distant from the original embodied performance; no matter how precisely chosen, the words remained a flat description of a lived, embodied process. Taussig (2011: 19) suggests that writing ‘obliterates reality, pushing it further and further out of reach’. He suggests that instead of using words, drawing can provide a way to ‘capture something invisible and auratic’ (Taussig, 2011: 13). With this in mind, creating an illustrated version of this embodied conceptualisation seemed more appropriate.

I was aware, however, of my own limitations as an artist. I have always reserved a jealous admiration for those able to represent their ideas visually, with what I perceived as my lack of talent meaning that I could not effectively use such visual(isation) techniques. The word ‘artist’ still feels like a term that applies to others, and I remain hesitant in claiming it as a description for myself. Regardless of such reservations, the will to achieve, growing from what felt like methodological necessity, helped me to overcome my long-standing fear of drawing and I began to put pen and pencil to paper. I also have aphantasia – an inability to visualise using my ‘mind’s eye’ (which I have written more about here with a comic here). My use of my own hands, therefore, and the resultant and emergent use of drawing of my hands, could be explained as my way of externalising the visualisation process. This could be understood as a kind of extended cognition (Clark & Chalmers, 1998) that helps me to develop my own understanding of complex theoretical concepts. The hands in the illustration above were not drawn (in either sense) from memory, but from direct observation. My hands, therefore, are tools that I use to help me imagine and think – both in themselves, as ‘dynamic formations’ (Deleuze and Guattari: 1987: 61) that allow me to shape and manipulate ideas. They are also as ‘dynamic formations’ that combine with pencil and pen, as means of producing visualisations on paper and screen, using what (Causey, 2017: 59) describes as ‘simple lines to communicate honestly’.

Causey, A. (2016). Drawn to see: Drawing as an ethnographic method. University of Toronto Press.

Taussig, M. (2011). I swear I saw this: Drawings in fieldwork notebooks, namely my own. University of Chicago Press.